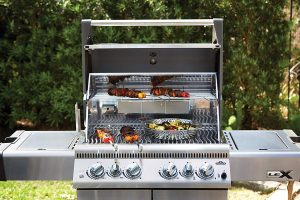 Here’s my hands-on Napoleon Lex 485 review. My old Brinkman barbecue completely disintegrated after only 3 years. I was devastated, but I understand why it happened. Here’s a synopsis:

Contents hide
1 Here’s my hands-on Napoleon Lex 485 review. My old Brinkman barbecue completely disintegrated after only 3 years. I was devastated, but I understand why it happened. Here’s a synopsis:
1.1 So, enough about the crappy barbecue.
2 Let’s move onto the Napoleon Lex 485 review.
2.1 Packaging
2.2 Assembly
3 Grilling On The Lex 485
3.1 Hot Spots…
3.2 Infra-Red Side Burner
4 Watch Me Sear a Rib Steak on the Lex 485 Sideburner
4.1 Infra-Red Rear Burner
4.2 Cleaning Maintenance
4.3 Grease Container
4.4 Side Shelf Ice Well
5 Click Here!!!
5.1 Latest posts:

So, enough about the crappy barbecue. 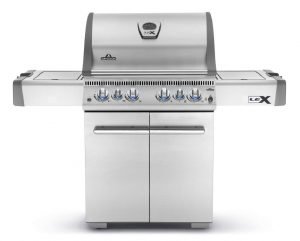 When it arrived, it was a very heavy, but nicely packaged product. I followed along on the inventory list, to make sure that all the pieces were there. They were. I was surprised at how many pieces there were, since it only required partial assembly….but it all made sense.

Assembly of the Lex took the better part of 3 hours. I am no stranger to tools, figuring out things, and using my hands, but this assembly-job surprised me. I was thinking maybe an hour and a half…I was wrong….

The fit and finish is perfect. There were no pre-machined holes or indents that were out of place or just slightly off. Everything is absolutely perfect. The only thing is that there’s just a lot of stuff to making this Napoleon grill into a reality.

When I found out, I was a little bit upset, but I soon forgot about it, after I used it for the first time!

Trust me….at the end, you will also say “It was worth it!” You’re lucky though, you’re being given a heads-up on the video.

So, this was exciting for me. I had always heard about having an infra-red side burner, and how amazing it would be for searing meat. Now I know why people love having these crazy hot searing burners. The first meat to touch my new Napoleon Lex 485 were some chicken and a rack of back-ribs. They turned out perfectly, with almost zero flare-ups!

The second meats to have the privilege of being cooked by the Napoleon, were a couple of “Filet Mignons”.

Beautiful to cook on. Really, surprisingly even heat. Because I’ve always had cheaper bbqs, I’d become very accustomed to grills with lots of hot and cold spots. This Napoleon has very few of them.

The infra-red side burner is a dream! I mentioned in the video below, that the side burner must reach 1200 degrees, but I think it’s much hotter. Probably more like 1500 degrees… This makes cooking steak an enjoyable experience. I always love to barbecue meat, but this Lex 485 has given me a new appreciation for the barbecuing process!

Watch Me Sear a Rib Steak on the Lex 485 Sideburner

There’s also a rear infra-red burner, for cooking with a rotisserie. I have not used it as of yet, but I will, and I will post an update on the results, when I do!

The interior shelf above the cooking area is also an expected, but handy feature. Let’s not forget that it adds to the overall cooking, and heating surface areas of this Napoleon grill.

After the first grilling session, I was dumbfounded at how dirty the Napoleon looked. There was a lot of black and little spots from splattering, and grease getting baked on. It makes perfect sense, but you have to keep in mind that the pristine-ness of a cooking area is a very temporary reality. All the cooking juices are going to get baked onto any barbecue, whether you like it or not!

A couple times a year, I will take out all the grates, heat shields, and whatever little parts I can, and I will clean them all thoroughly. That will ensure the maximum life-expectancy from the Lex 485.

One of the things that I forgot to deal with is the aluminum foil grease catcher, that’s underneath the barbecue. It’s a really small detail, but  a welcome, and handy feature. My previous gas grill didn’t have one. So, I never thought about it. I guess the grill just burned up the grease. Makes sense, as I always found that grill to be excessively smoky, and prone to fires.

Yesterday, I went to throw a couple T-Bones on there for me and my wifey. To my dismay, there was a foul odour around the Lex 485. After some investigation, I found that the grease catching container was overflowing, and smelling rotten…literally. Since I hadn’t emptied the grease in about 10 – 12 barbecuing sessions, the grease was festering in the heat….Yuck!!!

So, I’ve decided to empty it after each grilling session. This task will take about 20 seconds. A small detail, but an important one! 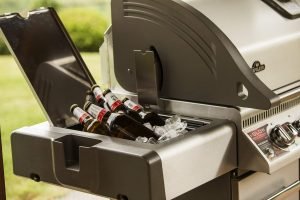 I almost forgot to mention that there’s a little ice cooler of sorts, on the left side shelf. This is super-handy if you’d like to keep a handful of beverages on ice, or some food products that need to stay refrigerated until they’re needed for use. This is really a handy feature. For me, not so handy for a few beverages, as I am a red wine guy, but super handy if you have a few guests over who drink beers! Also included, is a cutting board, which doubles as the secondary cover for the ice well.

Feel free to check out the Amazon listing for this awesome Napoleon! It’s the Lex 485…

Do Solar Ovens Really Work?
Is a Yeti Cooler Worth It?
10 Design Tips For Your Outdoor Kitchen
Outdoor Pizza Oven Guide

We are a participant in the Amazon Services LLC Associates Program, an affiliate advertising program designed to provide a means for us to earn fees by linking to Amazon.com and affiliated sites.

No one over here is getting rich off this program, but it keeps us in wine. So, if you buy something, it’s like you bought me a glass of wine…